The frequency and severity of congenital malformations (CMF) do not tend to decline in modern society. CMF for etiologic factors are referred to the pathologies of a multifactorial nature. Among the many causative factors of CMF there is a hereditary predisposition.

The objective of the study was to increase the effectiveness of complex individualized prophylaxis of congenital malformations in women with polymorphic alleles of genes of folate cycle enzymes, the second phase of the detoxification system through the use of diagnostic, preventive, and therapeutic measures.

Materials and methods. 120 women of reproductive age who live in the city of Odessa and the Odessa region were examined. The alleles of the genes of the folate cycle enzymes of methylenetetrahydrofolate reductase (MTHFR), 5-methyltetrahydrofolate homocysteine methyltransferase reductase (MTRR), glutathione-S-transferase M1 (GSTM1), folate acid, cyanocobalamin were determined.

Results of the study and their discussion. The determination of the polymorphic alleles of the genes of the folate cycle enzymes of methylenetetrahydrofolate reductase (MTHFR), 5-methyltetrahydrofolate homocysteine methyltransferase reductase (MTRR), glutathione-S-transferase M1 (GSTM1), low folate, cyanocobalamin indicates the presence of a hereditary predisposition to the emergence of CMF, before and during pregnancy. Polymorphism of genes that control the synthesis of GSTM1 may alter the activity of detoxification enzymes. Expression of genes of GSTM1 enzymes begins in the embryonic period. Glutathione-dependent detoxification plays a key role in disinfecting of DNA peroxides. Mistakes of metabolism, functions of the corresponding enzymes are realized by chromosomal abnormalities and the risk of the occurrence of CMF, which requires the use of antioxidant therapy before and during pregnancy.

Conclusions. It was found that a high (about 55%) frequency of the polymorphic alleles of the genes of folate cycle enzymes MTHFR (homozygous – 10.0%, heterozygous – 16.7%), 5 MTRR (homozygous 12.5%, heterozygous – 15.5%) , the second phase of the GSTM1 detoxification system (homozygous – 13.3%, heterozygous – 15.8%), the content below the reference values of folic acid in 26.7%, cyanocobalamin – in 63.4% of observations indicates a hereditary predisposition and may contribute the emergence of CMF, which explains the expediency of timely use of preventive measures including folates, antioxidants. 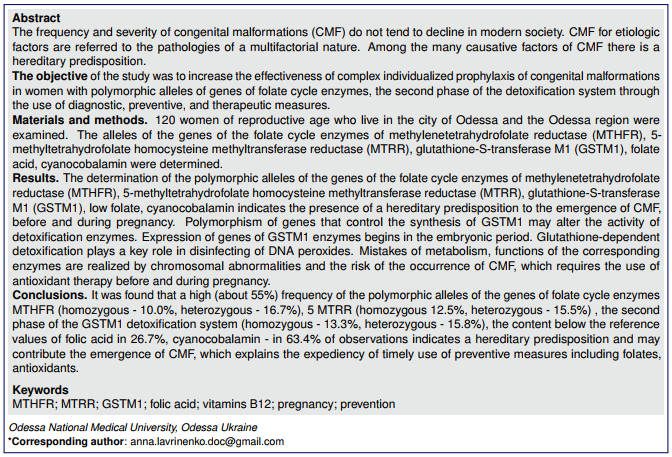