The article presents the results of the experimental study devoted to stress prevention in the course of directed formation of practical knowledge and skills in students. Since all the students constantly suffer from chronic constructive stress, the traditional system of acquiring knowledge and skills becomes time-consuming. There is a low assimilation of the material by students due to a lack of understanding of their tasks.

The objective of the study was to increase the efficiency of mastering practical skills in therapeutic dentistry considering the students’ psycho-emotional state.

Materials and methods. There were formed 2 groups of fourth-year students studying in different groups who attended the course of periodontology. In Group I (35 students), the teacher explained the specific purpose and benefits of manual removal of dental deposits using Gracey curettes and provided a specific manipulation scheme. The teacher slowly demonstrated each action: the instrument and the specific tooth for which it is used. Then, the students were offered to independently remove dental deposits according to the scheme. 34 students of Group II learned traditional removal of dental deposits using Gracey curettes. The teacher explained the manipulation, and, then, slowly demonstrated it on dental moulage. Afterwards, students independently performed the manipulation. We compared the success of mastering practical skills by students and developing an automatic skill.

Results. 34 students of Group I (97.1%) removed dental deposits properly on the first try, and after 10 identical manipulations, all students of Group I developed an automatic skill. In Group II, only 44.1% of students (15 individuals) developed an automatic skill after performing 10 identical manipulations. It should be noted that the main students’ actions in this group were accompanied by a considerable number of mistakes; students incorrectly selected dental tools for removing the deposits, and the teacher spent a lot of time correcting these mistakes.

Conclusions. The proposed method is an effective means of directed formation of manual action complex in students. The creation of action schemes for specific manipulation allows us to simplify the learning process reducing the time for the formation of automatic skills in students. 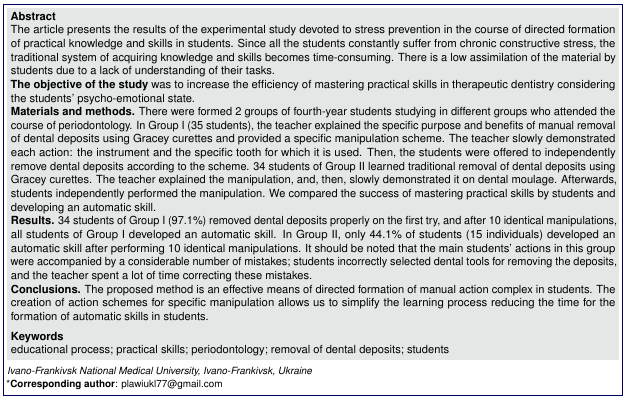