Adhesive intestinal obstruction is one of the most urgent problems in pediatric abdominal surgery due to its high rate resulting in a lot of complications, recurrences and relaparotomies.

The objective of the research was to examine the clinical efficacy of using intraoperative antiadhesive drugs in children to prevent recurrent adhesive intestinal obstruction.

Materials and methods. The examination and analysis of medical records of 86 children with adhesive intestinal obstruction treated in the clinic of pediatric surgery of the Ivano-Frankivsk National Medical University over the past 5 years was carried out. We identified two groups of patients: the comparison group included 40 children who received traditional treatment; the main group included 14 children who underwent the application of antiadhesive gel intraoperatively. The assessment of treatment effectiveness was carried out on the base of the postoperative course (recovery time of intestinal peristalsis, onset of enteral feeding, duration of hospital stay, incidence of early postoperative complications) and long-term outcomes (severity of adhesive disease symptoms, presence of recurrent adhesive intestinal obstruction and relaparotomies).

Results and discussion. In comparative evaluation of the postoperative course in two groups of patients we noticed a more favorable course in children of the main group that was shown by faster recovery of peristalsis, reduced duration of gastric stasis, quicker occurrence of self-defecation and shortened term of hospital treatment. In the comparison group recurrent adhesive intestinal obstruction occurred in 8 (20.0%) patients, in 6 (15.0%) cases relaparotomy was performed. In the main group of patients, recurrent adhesive intestinal obstruction was observed in one (7.1%) child; however, relaparotomy was not performed.

Conclusions. The intraoperative application of antiadhesive gel is a highly effective and safe way to prevent the recurrence of adhesive intestinal obstruction in children.

Problem statement and analysis of the recent research

Adhesive intestinal obstruction (AIO) is one of the most urgent problems in pediatric abdominal surgery due to its high rate resulting in a lot of complications, recurrences and relaparotomies. Intraabdominal adhesions can occur after any abdominal surgery; the frequency of their occurrence is very high (50-100%) depending on the type of surgery, pathology, that it caused by, intervention technology and other factors including individual susceptibility to adhesion formation. In 60-70% of cases peritoneal adhesions lead to acute small intestinal obstruction. In general, the frequency of AIO reaches 4.6% of all surgical pathologies [5-8]. 6% of children develop AIO after surgeries. The rate of recurrent AIO is 18-29%. According to our data, 75.5% of urgent surgeries lead to relaparotomy for AIO, while during elective relaparotomies (reconstructive surgery) pronounced adhesive process, that prolonged the operation, was found in 62.6% of patients.

The main treatment methods of AIO are laparotomy and adhesiolysis that allow restoring the intestinal permeability. Surgery for recurrent AIO often causes serious technical difficulties, accompanied by a large number of intraoperative complications. However, every new surgery increases the risk of AIO recurrence. AIO leads to serious complications, the most dangerous of which are the necrosis of the intestine, peritonitis, short bowel syndrome [1, 5, 6, 8].

Treatment of children with recurrent AIO requires considerable material inputs; these patients often require state social assistance. The seriousness of the problem of AIO treatment and relapse prevention is recognized by most surgeons. There are many ways to prevent AIO recurrence, but a significant reduction in its frequency is not observed. Obviously, the combination of several types of preventing adhesion formation is the most effective. It encourages surgeons to find new ways to prevent a recurrence of AIO.

The prevention of AIO includes appropriate surgical technique with restraint injuries of the parietal and visceral peritoneum, early stimulation of peristalsis, the use of substances which divide the surfaces of the wound in the early stages of healing [1, 4, 5, 7]. Recently, many surgeons have been interested in antiadhesive drugs that are used to prevent adhesion of damaged intraperitoneal structures and the formation of adhesions between them. A variety of solutions, films, gels are used as a barrier. An ideal antiadhesive barrier must be biodegradable, keeping in place of applying until the regeneration of damaged surfaces; it should not cause an inflammatory and immune response as well as disrupt the healing process [2, 3, 7-9]. In Ukraine, the most widespread antiadhesive gels (AG) are based on hyaluronic acid compounds (Defensal, Deviskar) and carboxymethylcellulose (Mesogel) or their combination (Giamaks Bio). The mechanism of action of antiadhesive drugs is the formation of a temporary (5-6 days) barrier between damaged areas due to the hydroflotation effect; then, the drug is dissolved. During this time the epithelization of damaged surfaces occurs. Actually in this period the formation of adhesions usually occurs but antiadhesive medications prevent this.

There are many investigations devoted to the use of AG in surgery and gynaecology. However, their effectiveness in pediatric abdominal surgery is not studied enough; the rate of complications and recurrence of AIO with AG application isn’t known [2, 3, 7, 9]. In Ukraine, there are many AG having different chemical compositions, but it’s not studied which of them are more effective and safe. In addition, there is an evidence of deterioration of interintestinal anastomosis healing during the application of AG [4].

The objective of the research was to study the clinical efficacy of intraoperative use of antiadhesive drugs in children for the prevention of AIO recurrence.

We made a survey and analysis of medical records of 86 children with early or late AIO being treated in the clinic of pediatric surgery of the Ivano-Frankivsk National Medical University over the past 5 years. The age of patients was from 5 months to 17 years; among them there were 50 (58.1%) boys and 36 (41.9%) girls.

All children admitted to our clinic underwent a complex examination: evaluation of anamnestic and clinical data, laboratory tests of blood and urine, X-ray and ultrasound examination of the abdominal cavity (including Doppler examination). Immediately after admission to the hospital patients were prescribed conservative treatment which was the preoperative preparation as well (decompression of the gastrointestinal tract, infusion therapy, stimulation of peristalsis, if necessary). 32 (37.2%) children had some improvement and gradual decrease in obstruction symptoms after treatment; not one of these patients went on to surgery. The remaining 54 children were operated on. 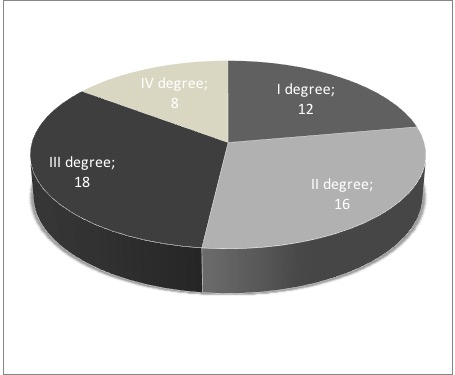 According to the objective of the research, we identified two groups of patients: the comparison group included 40 children who received traditional treatment; the main group included 14 children who underwent the application of AG intraoperatively. The groups were homogeneous in the prevalence and severity of adhesive process, age and AIO type. The assessment of treatment effectiveness was carried out on the base of the postoperative course (recovery time of intestinal peristalsis, onset of enteral feeding, duration of hospital stay, incidence of early postoperative complications) and long-term outcomes (severity of adhesive disease symptoms, presence of recurrent adhesive intestinal obstruction and relaparotomies).

Primary surgical operations that caused AIO were quite various, however, surgery for acute appendicitis and peritonitis prevailed (Fig. 2). Only in one (1.8%) child AIO occurred after the initial intervention of laparoscopy indicating the advantage of this intervention in preventing the formation of adhesions. The lowest frequency of AIO was observed in children at the age of 3-8 years. The vast majority of operated children (79.6%) developed late AIO. By the level of obstruction low-grade AIO prevailed (74.1% patients). The majority of patients (64.8%) developed obturation obstruction due to polygonal junctions, abdominal deflection, and formation of intestinal conglomerates. However, all preoperative complications (intestinal necrosis, peritonitis) were observed in children with strangulation obstruction and mixed obstruction, especially in late hospitalization. These complications were found in 6 (11.1%) patients.

Structure of primary surgery that caused AIO in operated children 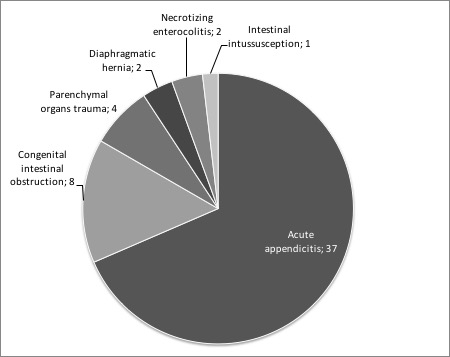 The most common types of surgery were laparotomy and adhesiolysis used in 36 (66.7%) cases. 8 (14.8%) patients underwent laparotomy, adhesiolysis and intestinal resection with anastomosis applying. In 10 (18.5%) cases laparoscopic adhesiolysis was used. In 5 patients surgery started with laparoscopy, however, due to the severity of adhesive process or the presence of necrotic intestines the conversion was carried out. The greatest technical challenges during surgery occurred in case of late AIO accompanied by the formation of tight junctions and conglomerates of intestinal loops fused with the parietal peritoneum.

During surgery in both groups of children well-known principles of preventing adhesion formation were used: sparing of the tissues, minimization of surgery duration, limited use of electrocoagulation, use of latex non-talc gloves, wet surgical drapes and lap sponges, moistening of the peritoneum with saline solution to prevent dehydration, as well as peritoneal lavage to remove blood, exudate, fibrin, without using solutions irritating the peritoneum, minimization of leaving foreign bodies in the abdomen (including drains, meshes, films, suture material).

In addition, in children of the main group to treat the intestinal loops and parietal peritoneum antiadhesive drugs were applied. In two cases AG GiaMax Bio 5.0 ml (Genewel, Korea) containing sodium hyaluronate and sodium carboxymethylcellulose was used. In two cases antiadhesive solution Defensal 250.0 ml (Yuria Farm, Ukraine) containing sodium hyaluronate and decamethoxinum was applied. In 10 (71.4%) patients AG Deviscar 20.0 ml (Heago LTD, UK) the active ingredient of which is sodium hyaluronate was applied. The procedure was carried out as recommended by manufacturers. The most damaged areas in the visceral and parietal peritoneum (separation of adhesions, areas with stitches) were treated first of all. In all bowel loops and parietal peritoneum sufficient amount of gel was applied. After the procedure the abdominal cavity was not washed out anymore, when suturing the peritoneum the wound was treated by gel from inside.

In comparative evaluation of the postoperative course in two groups of patients we noticed a more favorable course in children of the main group that was shown by faster recovery of peristalsis being auscultated, reduced duration of gastric stasis, quicker occurrence of self-defecation and shortened term of hospital treatment (Table 1).

The greatest attention was paid to the frequency of recurrent AIO and relaparotomies in both groups of patients. In the comparison group recurrent AIO occurred in 8 (20.0%) patients, in 6 (15.0%) cases relaparotomy was performed. In the main group of patients, recurrent AIO was observed in one (7.1%) child; however, this child underwent an effective conservative treatment and relaparotomy was not performed. In the comparison group one child died due to the complications of generalized connective tissue dysplasia (Ehlers-Danlos syndrome). There were no fatal cases in the main group.

Four patients of the main group underwent the application of AG after bowel resection and interintestinal anastomosis. Their anastomoses healed without any complications. In no case we observed the complications associated with the use of AG. Due to the small number of observations concerning the application of AG, we could not establish the advantages of every drug.

The intraoperative application of AG is a highly effective and safe way to prevent the recurrence of AIO in children.

The use of antiadhesive drugs is definitely effective. However, in order to identify drug which is the most efficient and safest among other drugs being available in Ukraine, we should continue research in this direction.