Eccrine porocarcinoma is extremely rare malignant skin adnexal tumor histogenetically derived from the sweat gland ducts and acrosyringium. The authors described a 66-year-old woman, who was diagnosed to have a malignant cutaneous neoplasia arising in the lateral side of the right shin. The lesion displayed exophytic growth with central ulceration, it was rounded and well-defined having 25 mm in diameter. Microscopically, it exhibited a mixture of atypical basaloid and clear cell population arranged in solid-nodular fashion, that grew out from the epidermis and infiltrated the corium. Ductal formations were sporadically present as well. Tumor was immunohistochemically positive for HMWCK, CK7, EMA, weakly positive for pCEA and negative for mCEA and BerEP4. The spectrum of histomorphologic and immunophenotypic findings favored a diagnosis of primary eccrine porocarcinoma. Having made the retrospective analysis, the authors found only this single one biopsy-proven case of EP during the last seven years suggesting exclusive diagnosis in a routine dermatopathologic practice.

Problem statement and analysis of the recent research

Skin adnexal tumors (SATs) are rare, but very large and diverse group of neoplasms, that may be histopathologically divided into follicular, eccrine, apocrine, sebaceous, and mixed cathegories [1]. The vast majority of such lesions are benign and complete surgical excision is usually curative. Conversely, their malignant counterparts occur only sporadically; however, they possess a high potential for metastatic spread, with a poor clinical outcome [1]. Therefore, making a diagnosis of malignancy in SATs is cardinal for therapeutic and prognostic purposes. Sweat gland tumors represent approximately 21% of all SATs; about 14% of such tumors are malignant [2]. Within this latter cathegory, eccrine porocarcinoma (EP, malignant eccrine poroma) is a unique tumor type accounting for 1.4 % of all sweat gland tumors [2]. Herein, we briefly present a case being observed in our institution focusing on dermatopathologic aspects of the disease.

A 66-year-old woman was referred by her dermatologist to the surgical department to remove a progressively growing skin tumor arising in the lateral side of the right shin. The patient claimed that the lesion had been present for half a year. Presumptive clinical diagnoses were pyogenic granuloma, angioma, or angiosarcoma. During physical examination, the lesion displayed exophytic growth with central ulceration; it was well-defined, rounded, had 25 mm in diameter, was gray-brownish in color with focal hemorrhages. Surgical extirpation was performed and a specimen was sent for microscopic examination. A biopsy sample was immunohistochemically studied using standard hematoxylin and eosin (H&E) stained paraffin sections. Histology has revealed malignant adnexal tumor, predominantly with solid-nodular microarchitecture, that grew out from the epidermis and infiltrated deep corium (Fig. 1, 2).

Solid tumor nests consisted of a mixture of basophilic and clear cell population connected to the epidermis. (H&E, magnification x40). 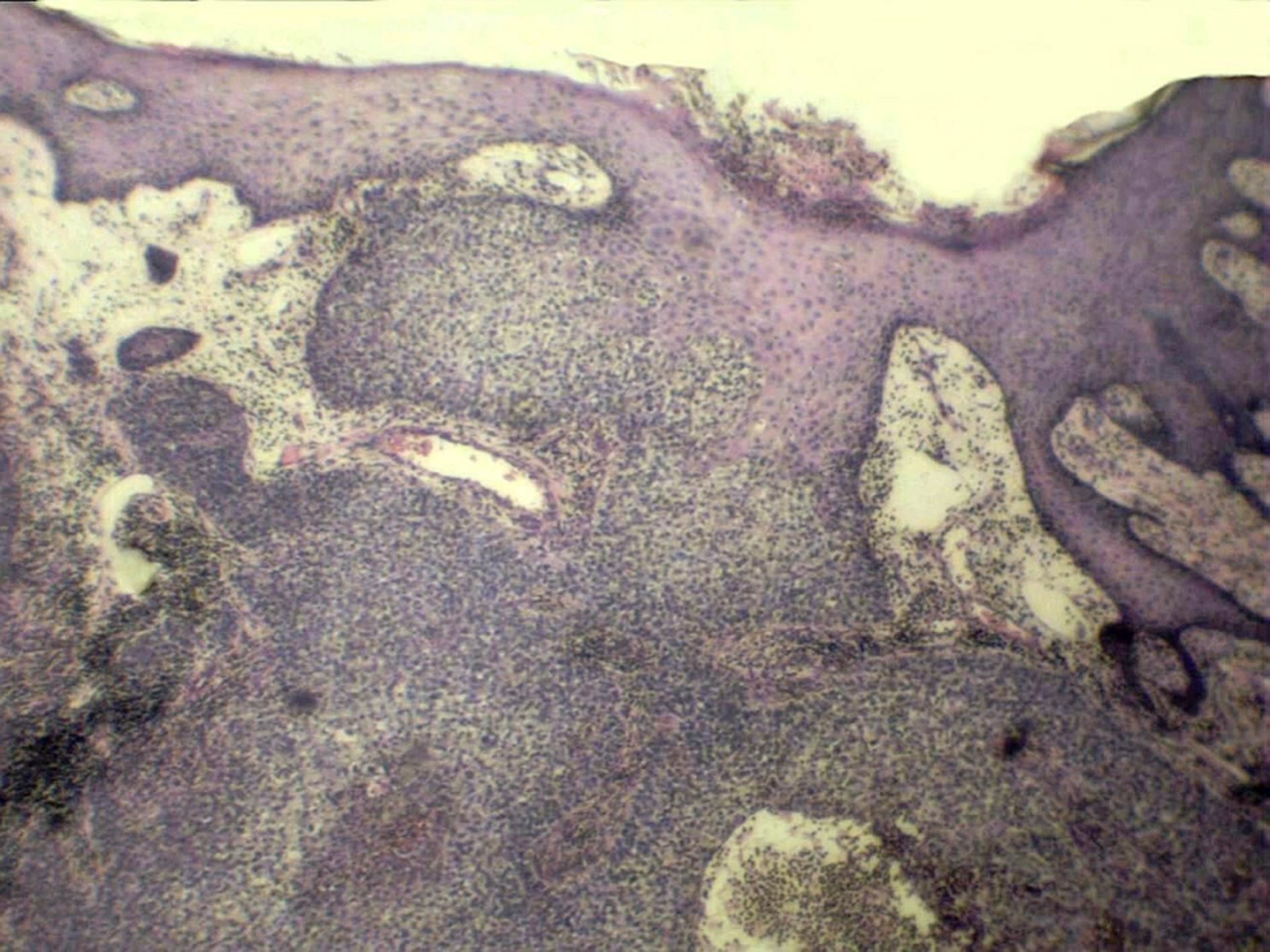 Focus of atypical basaloid tumor cells growing out from the epidermis and infiltrating the upper corium. (H&E, magnification x100). 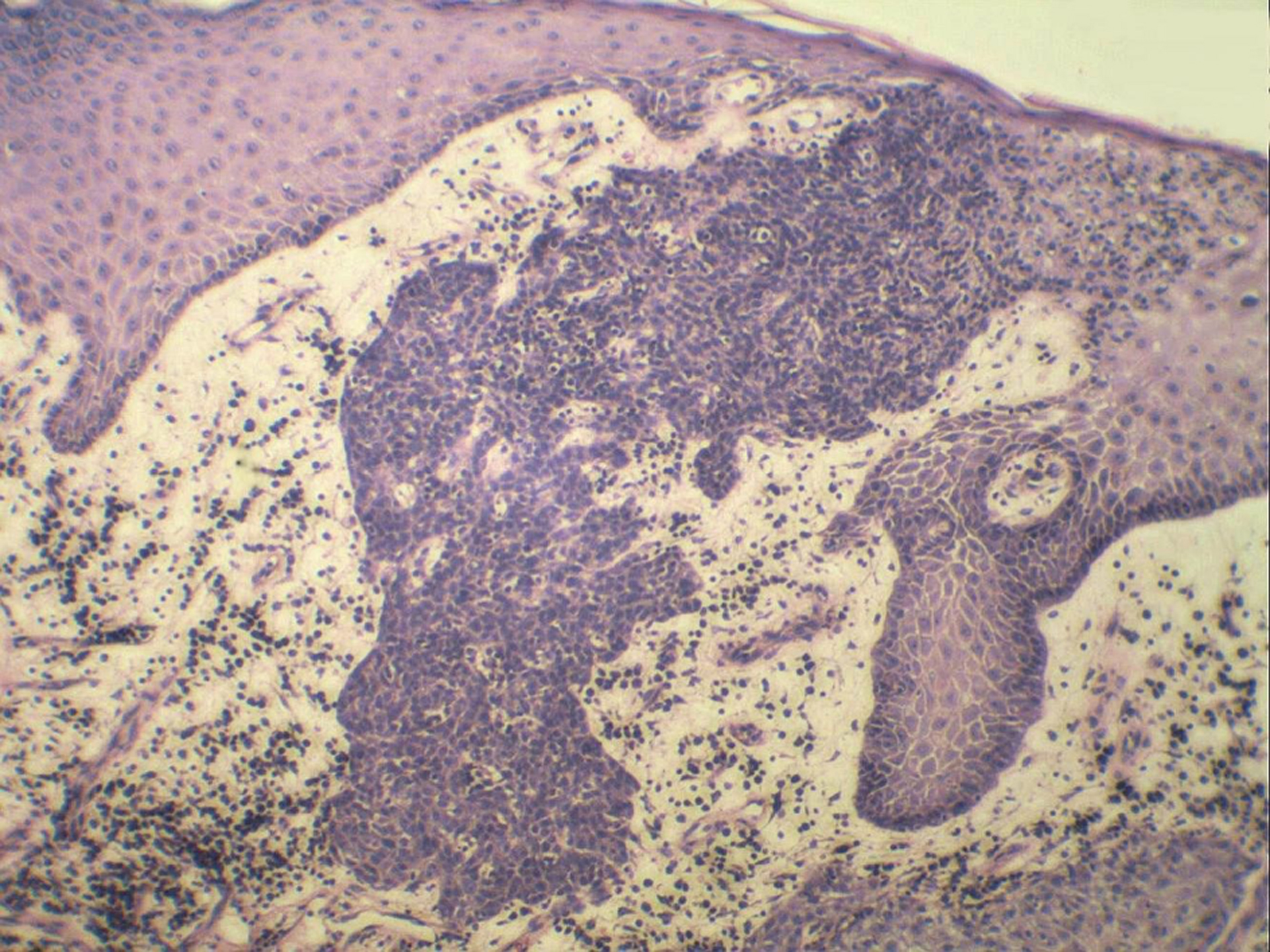 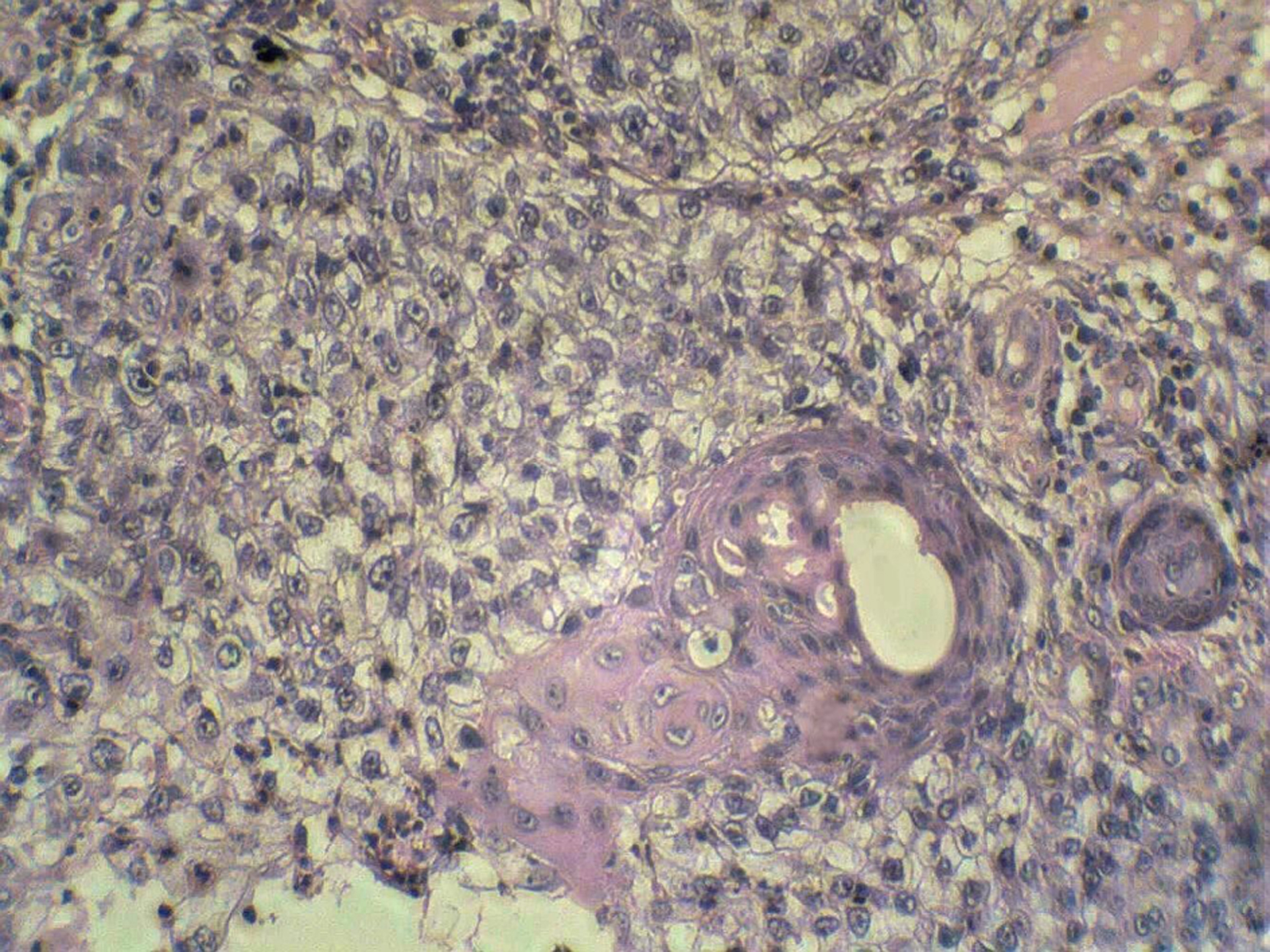 Intense immunoreactivity for CK7 in cancer tissue, sharply contrasting with a CK7-negative epidermis. Pagetoid spread of the tumor cells within epidermis (antibody against CK7, magnification x100). 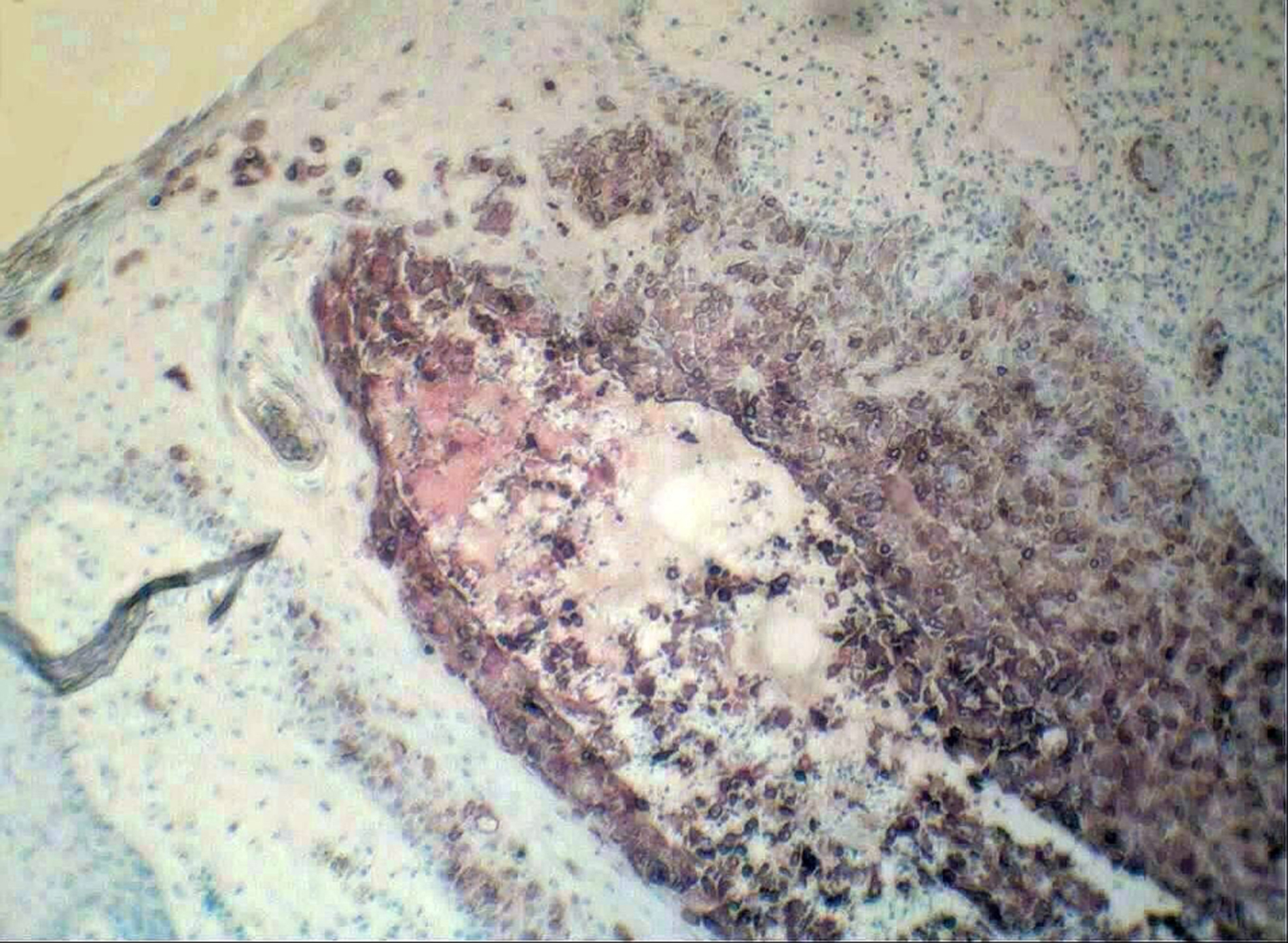 In some areas, a few interspersed dendritic melanocytes strongly immunoreactive for S-100 protein (clone 15E2E2, BioGenes) were arranged within tumor mass. The spectrum of histomorphologic and immunophenotypic findings favored a diagnosis of primary eccrine porocarcinoma. Resection margins were free of tumor and after achievement of the final diagnosis, the patient was further treated by her dermatologist. No evidence of recurrence or metastases has been recorded when preparing this article.

EP was first described in 1963 by Pinkus and Mehregan [3]. An old woman developed it as an unusual epidermotropic form of malignant skin tumor which had finally killed the patient. Based on the cytologic characteristics and pagetoid spread of neoplastic cells they stated that the lesion was probably of eccrine origin. They named it epidermotropic eccrine carcinoma. Since then, in literature there have been published numerous case reports [4-11]. Due to the rarity of this oncological entity, accurate data on its incidence, etiopathogenesis, and biological behaviour are quite poor. It has been reported that EP encompassed about 0.005 – 0.01% of all cutaneous malignancies [4]. Recently, however, Italian author Carmelo Urso has published the article stating that in his department, among 1,051 patients with malignant skin tumors diagnosed in 2011, thirty-seven persons had porocarcinoma, representing 3.5% of all cases [12]. It indicated the fact that this neoplasia might actually be more common than described in literature. In the context of such unexpectedly high percentage, we attempted to estimate its prevalence in our files. For this purpose, we have retrospectivelly analyzed all cases of cutaneous malignancies of epithelial and melanocytic origin (including lesions in situ), which had been diagnosed and registered in the database of the Department of Pathology during the period 2010-2016. During this period, 985 cases of primary cutaneous malignant tumors had been diagnosed, and only this case (0.1%) represented EP. Therefore, our results did not confirm the conclusions published by C. Urso [14] and rather inclined to the previous literature data [4] demonstrating an extremely low prevalence.

EP exhibits no special features and it cannot be clinically distinguish from other common skin tumors [4, 10]. It typically appears in elderly people in the fifth to seventh decades of their life [4, 10, 13] with a slight preponderance among women [4]. The most common location is the lower extremity [4, 13]. Our case is in accord with those clinical features. EP is histogenetically derived from the dermal ducts of sweat glands and acrosyringium [13]. It usually consists of cohesive nests and islands of predominantly poroid basophilic tumor cells, that grow out from the epidermis, and (in case of invasive lesion) invade into the dermis and deeper tissue [4, 13, 14]. The signs of ductal differentiation in the form of either well-formed atypical ducts or inconspicuous intracytoplasmic vacuoles are usually seen [4, 13, 14]. However, the spectrum of histomorphological features may be heterogeneous comprising the clear-cell, squamous-cell and spindle-cell differentiation lines, the presence of cuticular cells with eosinophilic cytoplasm, mucin-containing cells, or colonized melanocytes [4, 13, 14]. In certain cases, some of these cellular population may prevail and several specific variants of EP are defined, such as clear cells, squamous cells, sarcomatoid cells, pigmented cells and Bowenoid cells [14]. EP displays varying degrees of cytologic atypia and mitotic activity, although cellular pleomorphism may not be marked and many lesions present a low-grade appearance. Thus, epithelial cell atypia itself does not constitute a diagnosis of malignancy as it may be seen in benign poroma. Under such conditions, focal infiltrative growth pattern of lesions is more important for accurate diagnosis [4, 13, 14]. The presence of benign tumor counterpart (poroma) within EP is a discussed topic, as there is not clearly elucidated, whether EP arises ab initio, or via malignant transformation of benign lesion. In a consecutive series of 69 cases of EP [4], a benign tumor component occured only in 18% of cases. In contrast, Swan et al. [7] stated that all 27 cases of EP in their series arose alonside with benign poroma. Nevertheless, the popular belief is that the vast majority of EP arise de novo [13]. In our case, no benign-appearing tumor component was histologically seen.

Biological behaviour and clinical outcome of EP are hardly predictible. The original study series have demonstrated local recurrences in 4.1-35% [4-7, 10, 11] and metastases in 4.1–50% of cases [4-10]. Despite marked percentage variance, these data suggest that EP is likely an aggressive and prognostically unfavorable type of cutaneous neoplasia. Therefore, it is crucial to define those histologic parameters that may provide a guide to the prognosis. According to Robson et al. [4], the following four histopathologic features are the most important prognosticators: a) lymphovascular invasion; b) tumor thickness >7 mm; c) more than 14 mitoses per 10 HPF; d) the infiltrative growth pattern. However, the reliability of these variables remains debatable, since, for instance, Kurashige et al. [5] did not observe their relationships with prognosis in eight studied patients. A majority of cases displayed the infiltrative growth pattern and the given depth of invasion was considered to be predictive of recurrence or metastasis. Another authors [10] have reported two histopathologic criteria were significantly associated with a metastatic outcome: scattered pattern of the dermal invasive component and tumor thickness above 10 mm. Similarly, Belin et al. [11] have found that the recurrence risk was associated with the infiltrative and pagetoid growth pattern of tumor. On this basis it may be postulated that among the main histopathologic parameters, the growth pattern seems to be prognostically the most important in EP. Therefore, it should be always noted in biopsy reports.

Our experience showed that EP is exclusive when diagnosing in routine dermatopathologic practice. Due to recent data confirming that EP exhibits an aggressive biological behaviour, all patients suffered from this neoplasia require an accurate clinical follow-up.

The authors wish to thank Dr. Pokorný D. and Dr. Hochel A. for their educational support and technical assistance.