Crohn’s disease is an inflammatory bowel disease of unknown etiology, progressing with frequent exacerbation periods that can involve any part of the gastrointestinal tract. Although, it can manifest itself with complaints from the entire gastrointestinal tract; abdominal pain, diarrhea, nausea, weight loss and fever are the most important clinical symptoms. In this presentation, a 41-year-old male patient with known Crohn’s disease was presented to our hospital with the help of operation images.

The authors declare that no conflicts exist.

The authors declared no financial support.

Crohn’s disease is a chronic inflammatory disease with remission and exacerbation periods that is characterized by transmural inflammation that can involve any part of the gastrointestinal tract from the mouth to the anus [1]. This disease, the exact etiology of which is unknown, is generally diagnosed during adolescence. Abdominal pain, diarrhea, nausea, fever are the most common forms of clinical presentation [2]. Although perianal and enterocutaneous fistulas generally develop in Crohn’s disease, fistulas to the urinary system are observed as well [3]. Patients with Crohn’s disease confined to the colon often present with rectal bleeding, perianal complications, and extraintestinal symptoms involving the skin and joints [4]. It may be difficult to distinguish this group with colon-restricted disease from colon carcinomas [5]. In this case, we aimed to report our patient that he had ileus symptoms mimicking colon carcinoma.

A 41-year-old male patient was admitted to our clinic due to swelling and a foul-smelling discharge in the operation area after he had been operated on for left inguinal hernia on the outer center. On examination of the patient, there was an incision scar in the left inguinal region and a foul-smelling discharge compatible with the intestinal contents coming from this area. There was no acute abdomen in the patient. We learned that he had Crohn’s disease, which was followed up irregularly in the patient’s history, and that he received last medical treatment about 2 years ago. According to outpatient surgery reports requested, he was operated on due to swelling in the left inguinal region; primary hernia repair was performed and he was referred for further examination. The patient had high levels of white blood cell and C-reactive protein. In abdominal computed tomography performed to determine the etiology, a fistulous tract extending to the skin by infiltrating the sigmoid colon lumen and oblique muscles leading to the obstruction in the lumen, possibly starting from the level of the rectosigmoid junction and extending over the 10-cm segment along the sigmoid colon, was detected (Fig. 1). Rectosigmoidoscopy was decided to be performed. 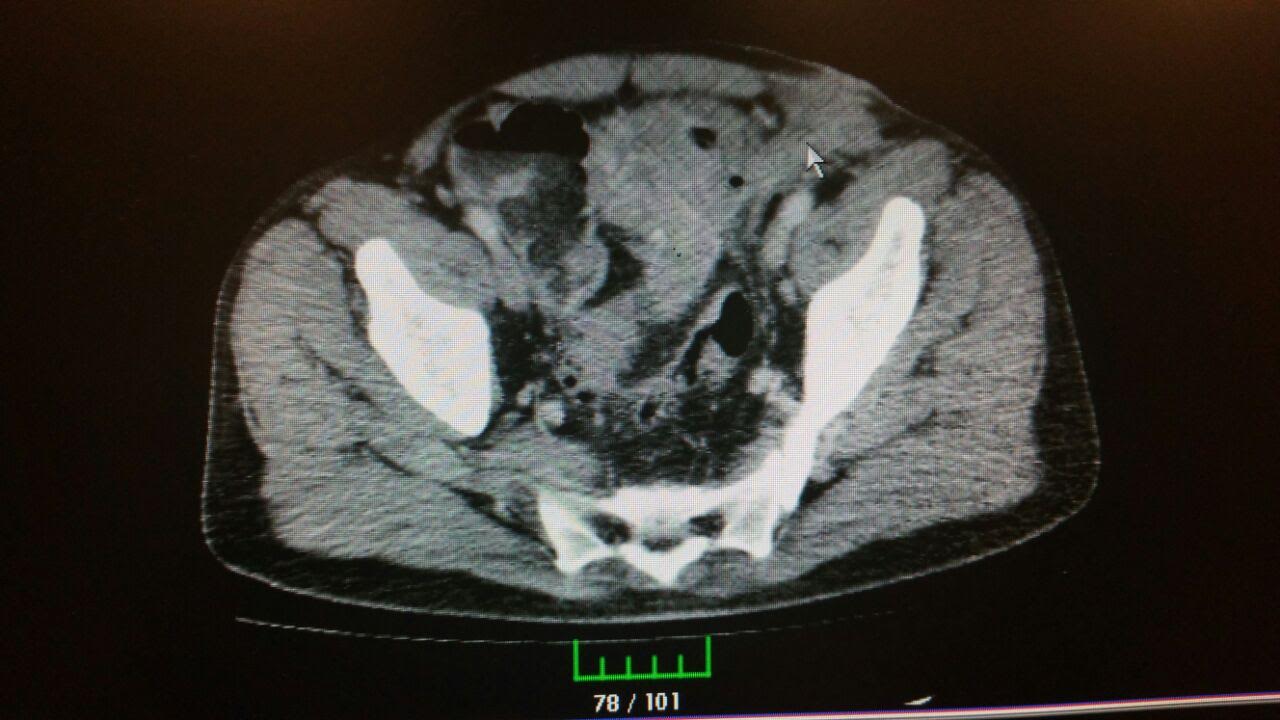 In rectosigmoidoscopy, after the lesion was covered with edematous necrotic material that did not allow the passage of the endoscope to the middle part of the sigmoid colon, biopsy was taken from this specimen and the procedure was terminated. Biopsy revealed that the patient’s complaints were “activated chronic inflammation” and the decision to perform surgery was taken due to increasing obstructive symptoms. During surgery, the sigmoid colon was observed to invade the surrounding tissue and have intestinal contents and abscess contamination in the abdomen. A Hartmann’s procedure was decided to be performed. The lesion in the sigmoid colon was observed to be fistulized from the mouth to the skin, bladder and terminal ileum. The state of the tract was also confirmed with methylene blue delivered to the bladder. The mass was unblocked, separated from the surrounding tissues by blunt and sharp dissections, and resected by partial cystectomy and segmental small bowel resection (Fig. 2). Surgery was completed without any complications. 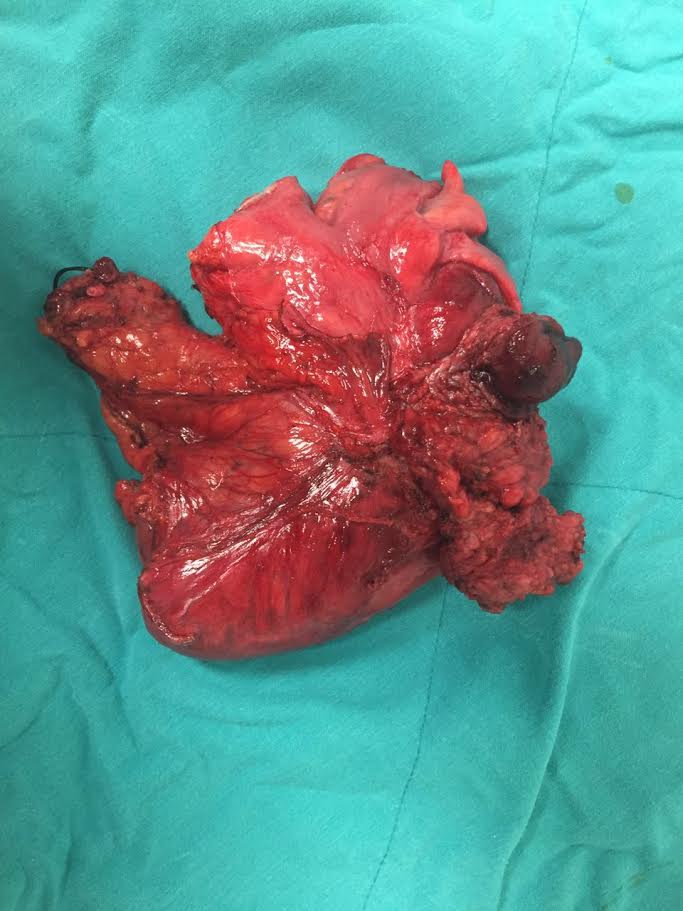 The histopathological examination of the specimen revealed chronic active colitis, glandular distortion, destruction and cryptic abscesses in the colon. Inflammation was observed in all wall floors of the colon. There was inflammatory granulation tissue on the serosal surface. There was observed fistula formation. The findings were reported as those related to Crohn’s disease. The patient, who was discharged after surgery, was directed to the gastroenterology department.

Crohn’ disease is a disease of unknown etiology characterized by granulomatous inflammation with healing and exacerbation periods that can involve any part of the gastrointestinal tract [1]. It most often manifests itself as abdominal pain, nausea, diarrhea and fever [2]. It tends to form fistulas to the skin and perianal region [3]. Imaging methods, especially computed tomography and endoscopic procedures, can be used in diagnosing Crohn’s disease. Histopathological examination is absolutely necessary for definitive diagnosis. The type of treatment for Crohn’ disease is determined by its severity, form and localization [6]. The goal of treatment is to clinically achieve remission. In medical treatment, immune system effective drugs such as sulfasalazine, mesalamine, cyclosporin, prednisolone, methotrexate, tacrolimus and various antibiotics can be used [6]. In complicated cases, such as obstruction, perforation, bleeding, surgery is inevitable. Postoperative abscess formation, sepsis, new fistula formation, anastomosis leaks, and ileus are possible postoperative complications [7]. There were fistulous tracts in 3 different locations of the diseased area in the sigmoid colon, which is interesting in our patient.

Written informed consent was obtained from the patient who participated in this case.

Conflict of interest: The authors declare that no conflicts exist.

Kuzu A. Crohn Hastalığı [Internet]. cited 2020 May 29Available from: https://www.kolonrektum.com/crohn-hastaligi.