Anti-TNF treatment has transformed the treatment of chronic inflammatory rheumatism. Although the therapy can be highly effective, anti-TNF drugs are associated with an increased risk of tuberculosis, especially extra-pulmonary tuberculosis.

We report a case of bifocal tuberculosis: laryngeal and pulmonary tuberculosis revealed by laryngeal involvement in a patient aged 41 years with axial spondylarthritis treated with Adalimumab.

The authors declare that no conflicts exist.

The authors declared no financial support.

Anti-TNF drugs have improved the management of chronic inflammatory rheumatic diseases. However, they are not devoid of side effects, particularly infectious ones. Indeed, anti-TNF drugs can reactivate latent tuberculosis, especially extra-pulmonary tuberculosis. This risk is particularly increased with Infliximab and Adalimumab [1].

Laryngeal tuberculosis is rare and rarely primitive. It is often secondary to primary pulmonary localization. Its clinical presentation is often variable and not specific [2]. It should be suspected systematically when there are atypical otorhinolaryngologic symptoms under anti-TNF treatment.

The interest of this observation is to point out to the exceptional localization of tuberculosis in patients under anti-TNF drugs.

We report the original observation of bifocal laryngeal and pulmonary tuberculosis revealed by sore throat in a patient followed for spondylarthritis (SpA) under the use of Adalimumab.

Mr. H.A., 41 years old, non-smoker and non-alcoholic male patient, followed for 13 years for a severe axial SpA complicated by bilateral coxitis that required a double hip replacement surgery (double total hip replacement). Biotherapy with Etanercept (50mg/week) was indicated due to the severity of the osteoarticular damage and the resistance to different families of non-steroidal anti-inflammatory drugs. All screening tuberculosis tests were normal, therefore Etanercept was initiated in 2014 without anti-tuberculous chemoprophylaxis. A switch to Adalimumab (40mg/15 days) was decided in 2019 since an anterior uveitis of the left eye had developed in the patient.

After 3 months of the introduction of Adalimumab, the patient was presented with sore throat, episodes of dysphonia and progressive difficulty in deglutition despite 2 weeks course of antibiotic and high dose of corticosteroids. The patient complained of weight loss of at least 10% in just 3 months. There were no chest or osteoarticular signs. He did not report any known contact with a case of active tuberculosis.

On examination, the patient was afebrile, looked thin with body mass index: 15.64 Kg/m². There were no evident cervical Lymphadenopathies. Physical examination of the chest was normal. 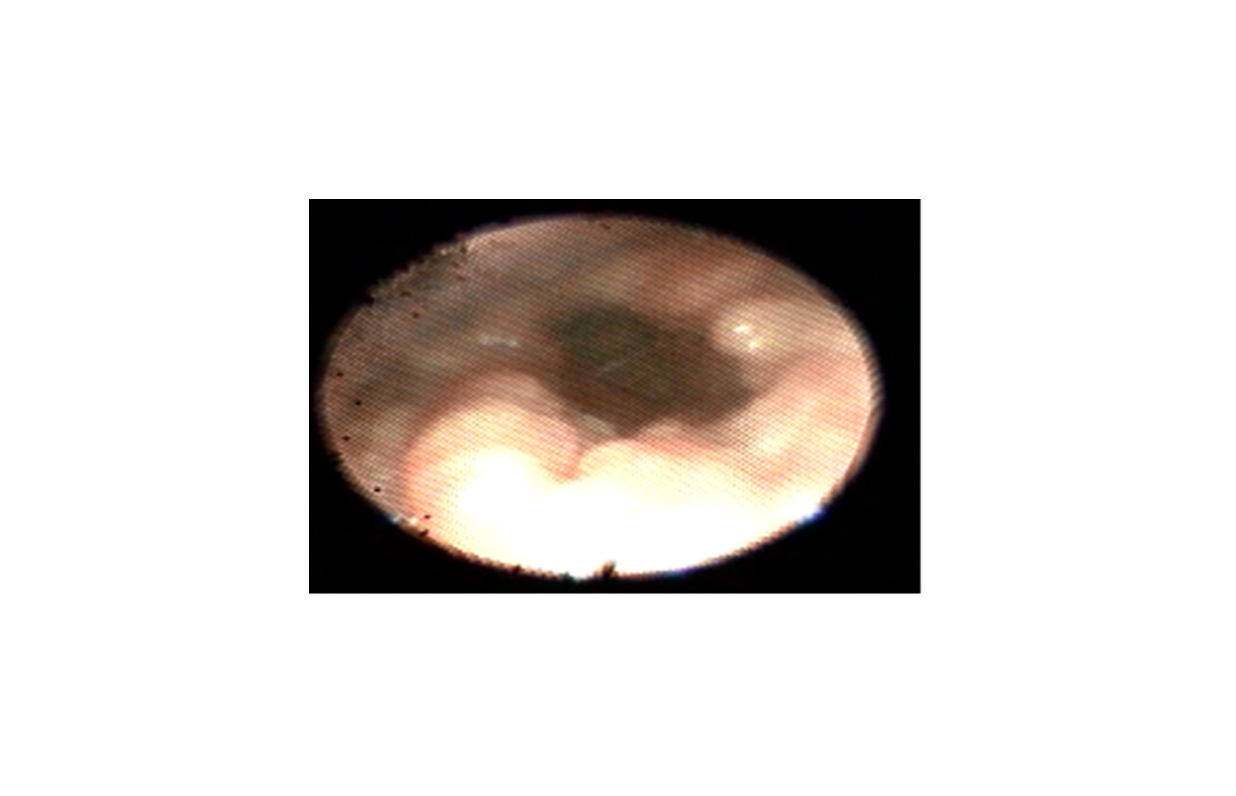 As malignancy was suspected, a laryngeal biopsy was performed. Histology revealed no malignancy but giganto-cellular and epithelioid granulomas without caseous necrosis. Eso-gastrointestinal endoscopy was normal.

We’ve completed with thoracic computed tomography (Fig. 3), which showed a focal pulmonary condensation and micronodular infiltration. A bronchoscopy demonstrated a laryngeal translucent granules and inflammatory lesions of the right bronchus. GeneXpert test on the Bronchoalveolar lavage fluid was negative. Histological examination of the bronchial biopsy showed non-specific fibro-inflammatory lesions with no tumor lesion.

On follow up, there were complete resolution of clinical symptoms (complete clearing of dysphagia, dysphonia and sore throat), and normalization of the biological tests (inflammation and lymphopenia). All lesions were cleared in the otorhinolaryngologic control (Fig. 4), bacilloscopic control of sputum was negative and pulmonary lesions subsided (Fig. 5).

Laryngeal endoscopic control after 4 months of the anti-tubercular treatment. Supraglottic oedema and nodular mucosa had disappeared. 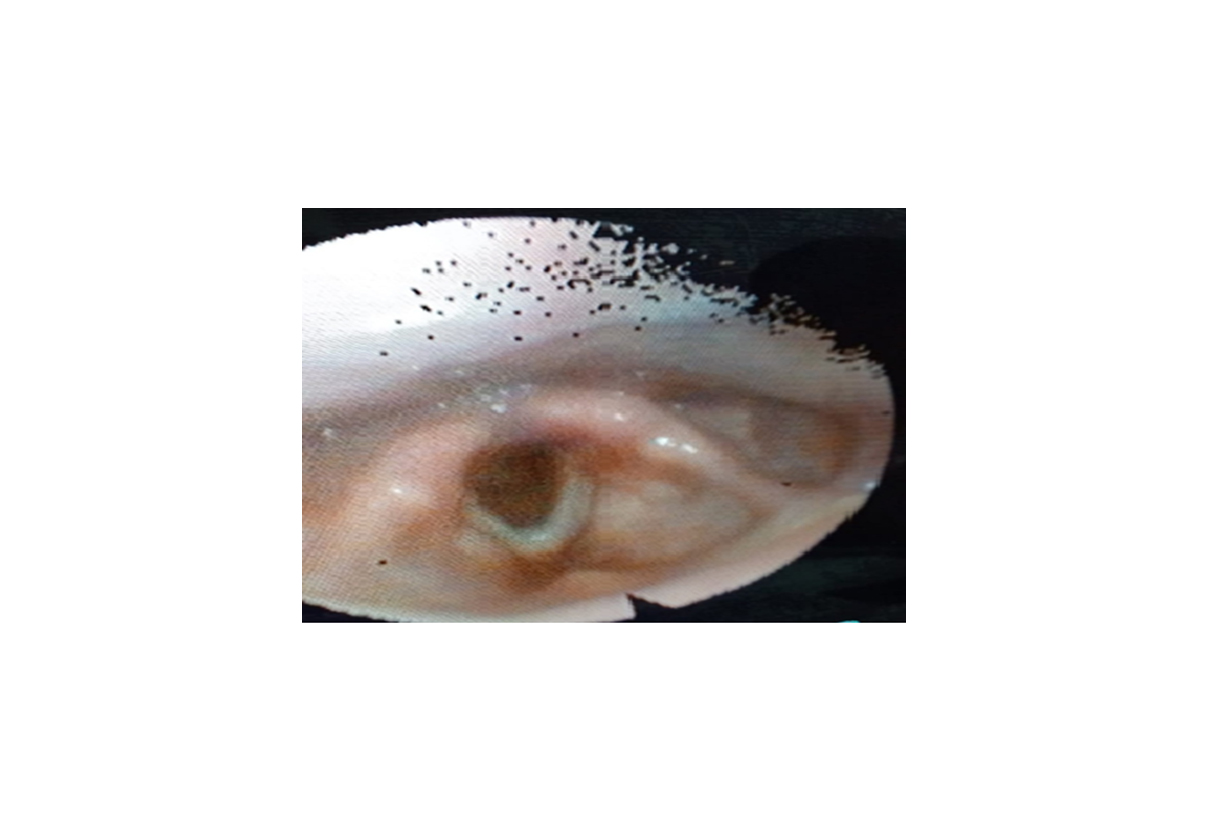 Control thoracic computed tomography after 4 months of the anti-tubercular treatment. Condensation and frosted glass area of the middle pulmonary lobe had disappeared. 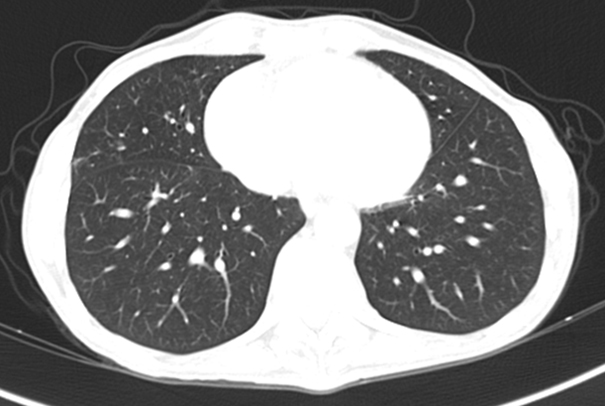 Anti-TNF drugs constitute a breakthrough in the treatment of SpA. Although their efficacy, they are associated with the serious risk of developing infectious tuberculosis [1].

The introduction of latent tuberculosis screening procedures is necessary before starting anti-TNF therapy. However, tuberculosis developed under anti-TNF drugs can still occur despite a negative initial screen [5, 6].

Indeed, tuberculosis in patients receiving anti TNF-therapy usually arises from the reactivation of latent infection and occurs often within the first three to eight months. Nevertheless, many cases of new tuberculosis infection under anti-TNF drugs have been reported [7].

Quantiferon test is more specific than tuberculin tests in screening for pulmonary tuberculosis. However, false negatives and false positives have been described especially in immunosuppressed patients [3].

GeneXpert is recommended by the World Health Organization in the pulmonary and extra-pulmonary tuberculosis diagnosis in both immunocompetent and immunocompromised patients [8, 9]. It is a rapid molecular test with high performance (sensitivity and specificity) [10]. Multiple geneXpert testing on bronchoalveolar lavage fluid can improve the test sensitivity [9].

Laryngeal tuberculosis is observed very rarely (0.5-2% of patients with tuberculosis), usually with immunocompromised diseases. It is the most common granulomatous disease of the larynx and represents less than 1% of all forms of tuberculosis [11, 12].

The lesions seen on laryngoscopy may be granulomatous, edematous, ulcerative, polyploid or non-specific [15, 16].

In immunocompromised patients, laryngeal tuberculosis could be confirmed in patients with chronic granulomatous inflammatory exudates and a complete recovery under antitubercular therapy even without the presence of caseation [16, 17, 18, 19].

However, the absence of caseous necrosis raises diagnostic difficulties and can be easily confused clinically with laryngeal cancer and other granulomatosis. A biopsy is mandatory for a definitive diagnosis. Under antitubercular treatment, the clinical signs of laryngeal tuberculosis disappear within a few weeks [16].

A long-term follow-up is necessary since the laryngeal complications can occur [12].

Bifocal pulmonary and laryngeal tuberculosis under anti-TNF therapy is exceptional. The literature review reports only one case developed under Adalimumab in ulcerated colitis [20].

The research was conducted according to the Declaration of Helsinki.

Written informed consent was obtained from the patient.

Conflict of interest: The authors declare that no conflicts exist.