Insulin-like growth factor-II mRNA-binding protein 3 (IMP3) is an oncofetal protein upregulated in tumor cells during carcinogenesis. It has been linked to adverse clinical outcome in many malignancies.

This study was aimed to evaluate an immunohistochemical expression status of IMP3 in cutaneous basal cell carcinoma (BCC) and to correlate it with the Ki-67 index values.

Biopsy specimens from 32 cases of BCC were enrolled into this analysis. All samples were immunohistochemically stained for IMP3 (Clone 69.1) and Ki-67 antigen (Clone MIB-1).

IMP3 showed a weak expression in 11 (34.4%) cases, a moderate expression in 11 (34.4%) cases, a strong expression in 5 (15.6%) cases, and negative staining in 5 (15.6%) cases. Among seven BCCs exhibiting aggressive-growth features, all but one showed weak reactivity. In contrast, all five BCCs manifesting strong IMP3 positivity consisted of the indolent-growth histologic subtypes. BCCs with infiltrative histomorphology did not appear to have a tendency towards more striking production of IMP3. There was no significant relationship between the IMP3 expression status and the proliferation status (Ki-67 ≤ 50% vs. Ki-67 > 50%) of the tumor tissue (p > 0.05).

The vast majority of cutaneous BCCs express IMP3, suggesting this oncoprotein is implicated in BCC carcinogenesis. However, more pronounced expression does not seem to be associated with aggressive-growth phenotype of BCC or higher proliferative activity of neoplastic cells.

The author declares that no conflicts exist.

The author declared no financial support.

Insulin-like growth factor-II mRNA-binding protein 3 (IMP3) is a member of a family of RNA-binding proteins, which consists of IMP1, IMP2, and IMP3 [1, 2]. They are implicated in mRNA trafficking and stabilization, and play a role in the post-transcriptional regulation of cell growth during embryogenesis [1, 2]. IMP3 is an oncofetal protein encoded by the gene located on chromosome 7p11 [1, 2]. It is expressed in developing epithelium, muscle, and placenta during the early stages of embryogenesis. It is required for the migration of cells forming the roof plate of the neural tube which suggests that IMP3 may play an important role in promoting cell migration [1, 2]. Moreover, IMP3 has gained considerable interest as a cancer-associated protein as it has been reported in a variety of human malignancies and has been linked to advanced disease stage and adverse clinical outcomes [1-6]. These data indicate that it may represent a valuable prognostic marker in human cancer. One of the signs of aggressive biological behaviour of malignant tumors is a high proliferative activity of neoplastic cells. The Ki-67 antigen is widely used in routine pathological investigation as a proliferation marker [7]. It is a nonhistone nuclear protein that is expressed during active phases of the cell cycle (G1, S, G2, and mitotic phase), being absent in the quiescent phase [7]. Immunohistochemical assessment of nuclear Ki-67 staining (the Ki-67 index) in cells provides a quantitative measure of their proliferation status, and it belongs to basic prognostic indicators in the biopsy reports [7].

The aim of this study was to evaluate an immunohistochemical expression status of IMP3 in a set of cutaneous basal cell carcinomas (BCC) and to correlate it with the Ki-67 index values. It was hypothesized that more pronounced expression of IMP3 might be related to higher proliferation of tumor cells.

Representative biopsy specimens from 32 cases of primary BCC of the skin were enrolled into this analysis. They were obtained from 29 patients (16 males, 13 females) in the age range of 37 - 93 years (mean age - 69.0 years). The BCC samples included three histopathological subtypes: superficial (7 cases), nodular (18 cases), and mixed nodular-infiltrative (7 cases). According to previous articles [8, 9], for further analysis, they were divided into two separate subgroups: the first one consisted of twenty-five non-aggressive (indolent) BCC subtypes (superficial & nodular); the latter included seven aggressive BCCs with focal infiltrative growth pattern (i.e., the nodular-infiltrative subtype). The topographic locations of the lesions were as follows: head & neck (17 cases), trunk (10 cases), upper/lower extremities (5 cases). Biopsy samples were routinely processed and all were simultaneously stained for IMP3 (Monoclonal Mouse Anti-Human Antibody, Clone 69.1, DAKO, Ready-to-Use) and Ki-67 antigen (Monoclonal Mouse Anti-Human Antibody, Clone MIB1, DAKO, Ready-to-Use) according to manufacturer' s instructions. The immunohistochemical results concerning IMP3 were interpreted by a four-tiered semiquantitative scoring system adopted from a previous study [2]. Cytoplasmic expression was evaluated by staining intensity (0, 1+, 2+, and 3+), and the average relative fraction of positive tumor cells was determined as a percentage. A final score was built from these two parameters according to the criteria described in Table 1 [2]. The Ki-67 proliferation index was calculated as a mean percentage of Ki-67 immunoreactive neoplastic cells within the tumor tissue. Based on a previous study [10], tumors were scored as follows: 0 - 5% of reactive cells (negative), 6 - 25% of reactive cells (1+), 26 - 50% of reactive cells (2+), 51 - 75% of reactive cells (3+), and > 75% of reactive cells (4+). “High” labeling encompassed 3+ or 4+ grades, while “low” labeling referred to 1+ or 2+ grades [10]. Data were collected in a databank, using a R software (https://www.r-project.org/). The Fisher’s exact test was employed and a p-value of < 0.05 was considered statistically significant.

IMP3 showed mixed cytoplasmic and membranous staining in epithelial neoplastic cells. Overall, there were 5 (15.6%) negative cases, 11 (34.4%) cases with a weak expression, 11 (34.4%) cases with a moderate expression, and 5 (15.6%) cases with a strong expression. IMP3-positive tumor cells were mostly unevenly distributed within the tumor tissue where areas containing a high number of reactive cells often occured adjacent to areas with a minimal amount (or none) of immunolabeled cells. With regards to the histologic subtype, among seven BCCs exhibiting aggressive-growth features (the nodular-infiltrative subtype), all but one showed a weak expression (an infiltrative component was usually negative) and the remaining one showed a moderate expression. In contrast, all five BCCs manifesting strong IMP3 positivity consisted of the indolent-growth histologic subtypes (superficial and nodular) (Table 2). These data could not be statistically verified due to a small number of cases but BCCs with infiltrative histomorphology did not appear to have a tendency towards more striking production of IMP3. In normal skin, IMP3 showed variable immunoreactivity in the inner root sheath of the hair follicles. All other structures were negative.

IMP3 status of basal cell carcinomas in relation to the histologic subtype.

The Ki-67 antigen exhibited strong nuclear immunoreactivity ranging from 15% to 100% of cancer cells (mean value of 39.0%).

When the expression status of IMP3 and the Ki-67 index of tumor cells (Table 3) were compared, BCCs manifesting more striking IMP3 staining did not appear to have a tendency towards higher cell proliferation (p > 0.05) (Fig. 1).

IMP3 status of basal cell carcinomas in relation to the Ki-67 proliferation index. 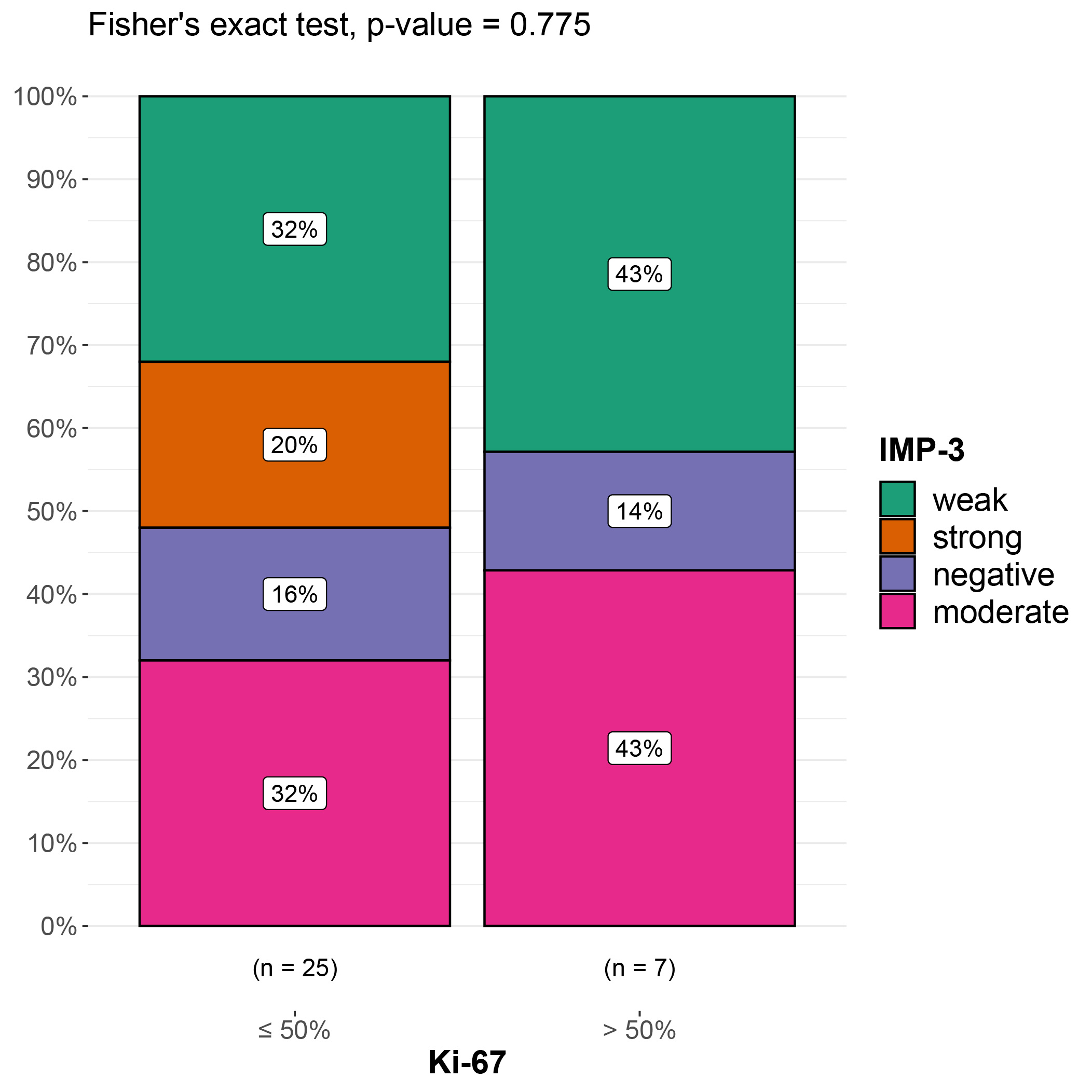 Representative cases of IMP3 and corresponding Ki-67 antigen expression in the tumor tissue are presented in Fig. Fig. 2-Fig. 6. 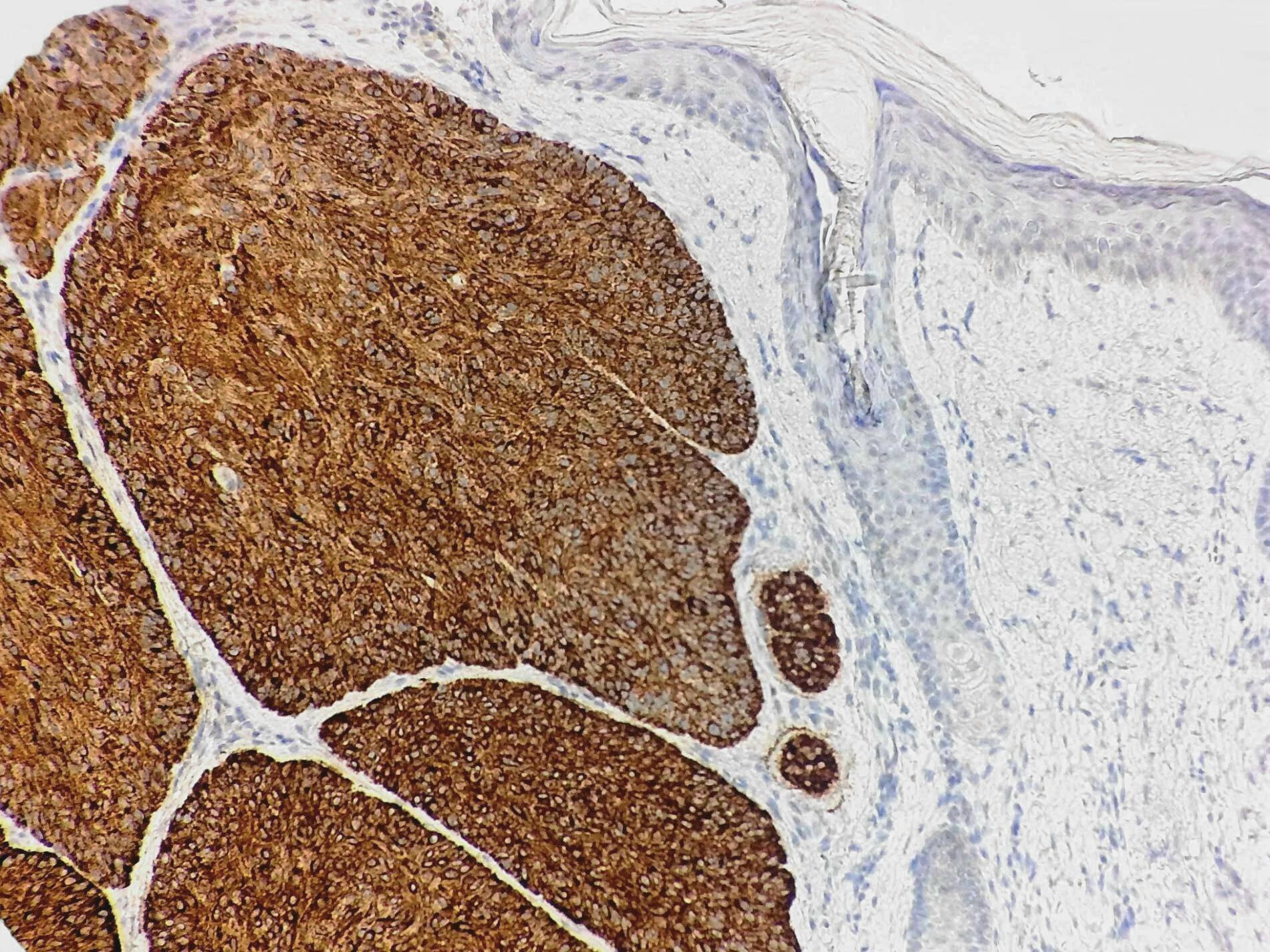 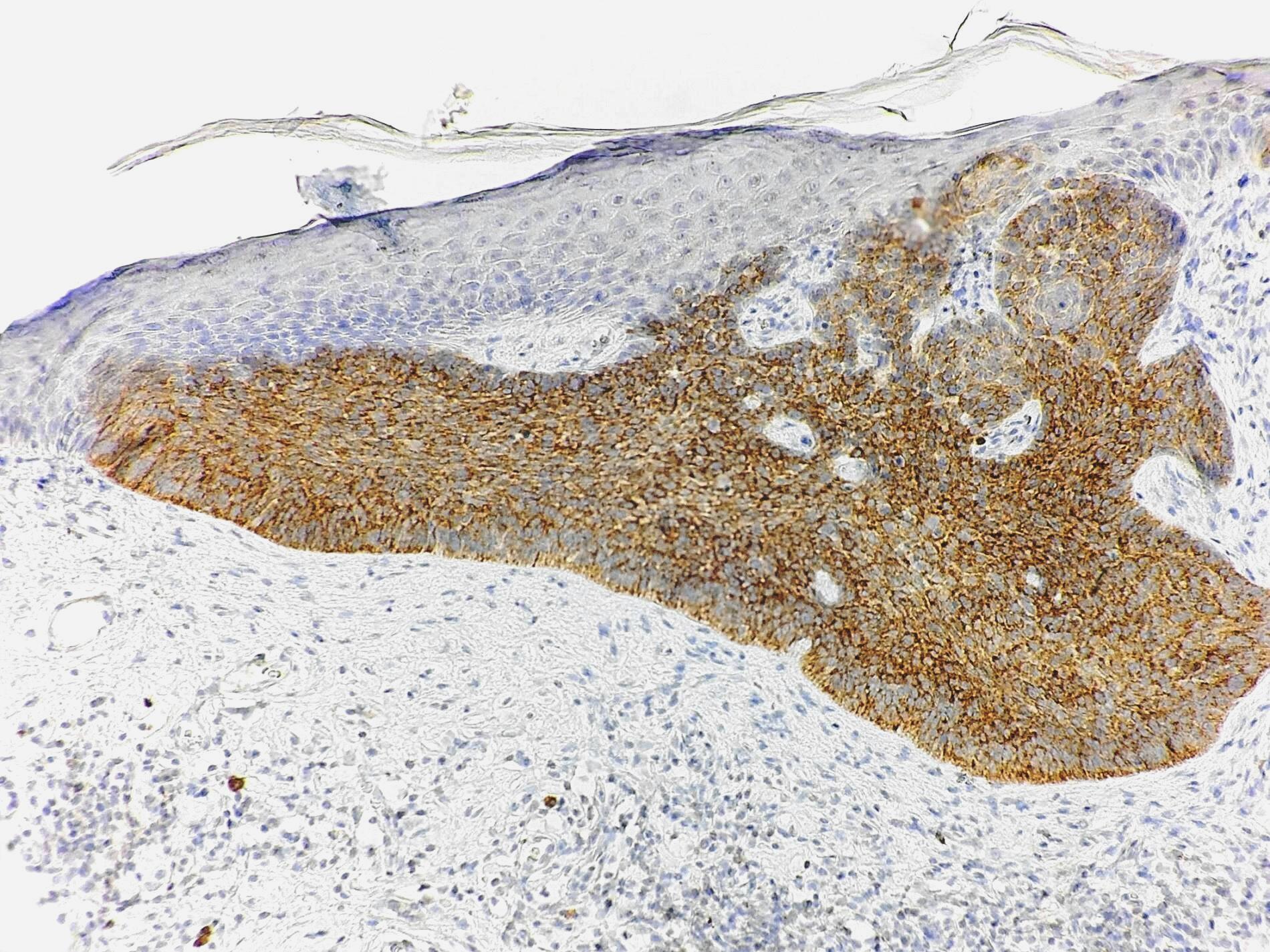 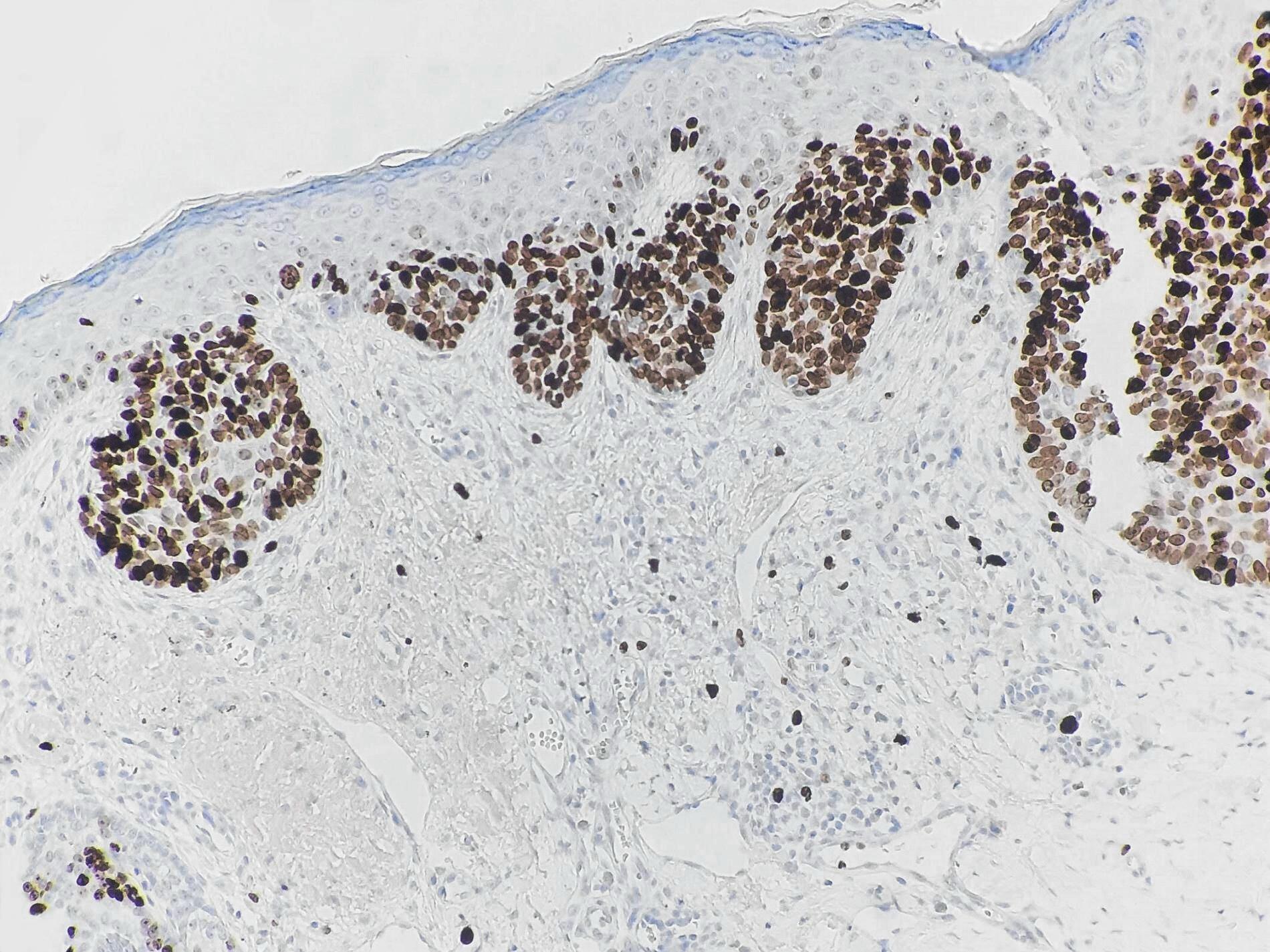 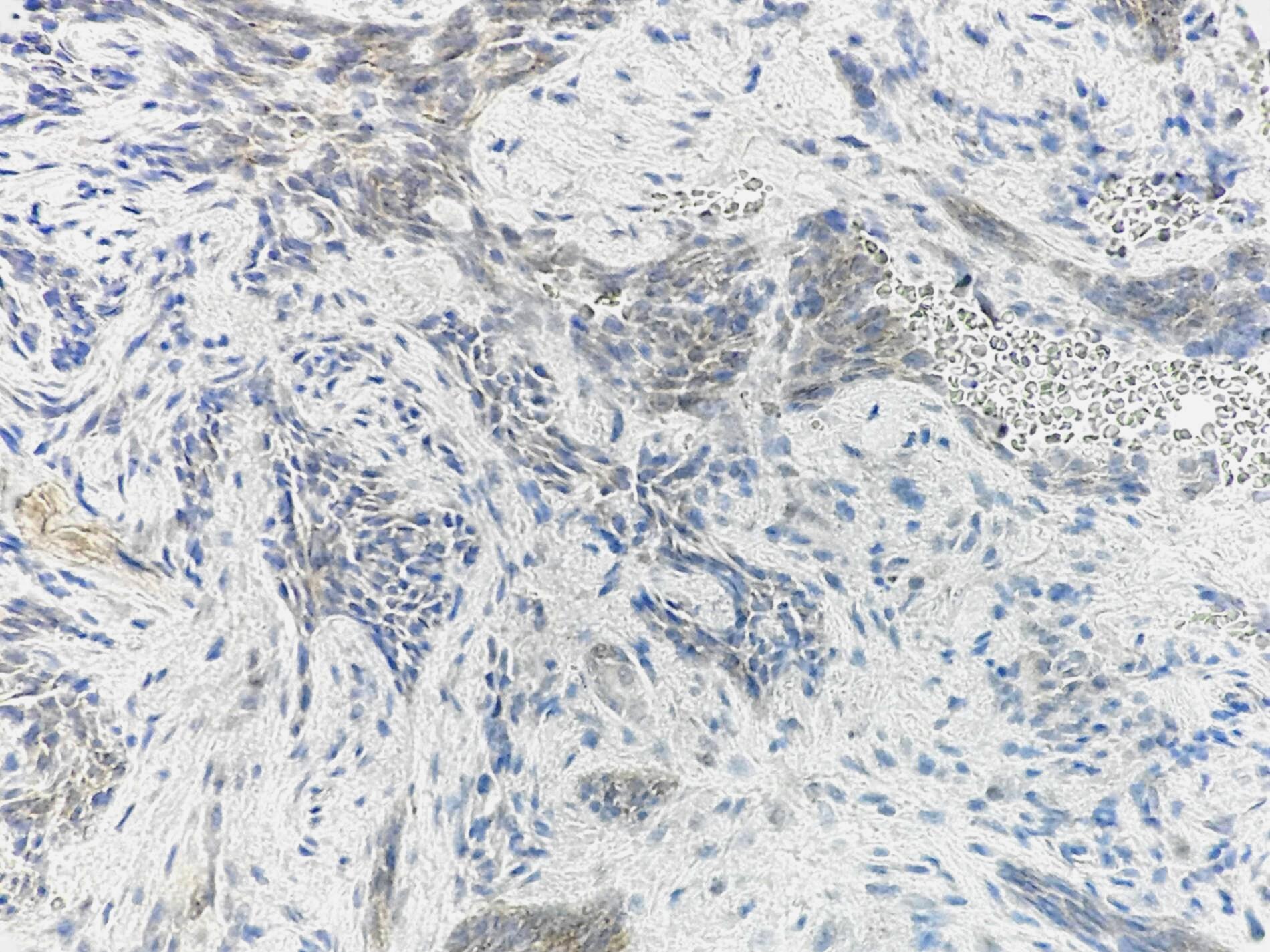 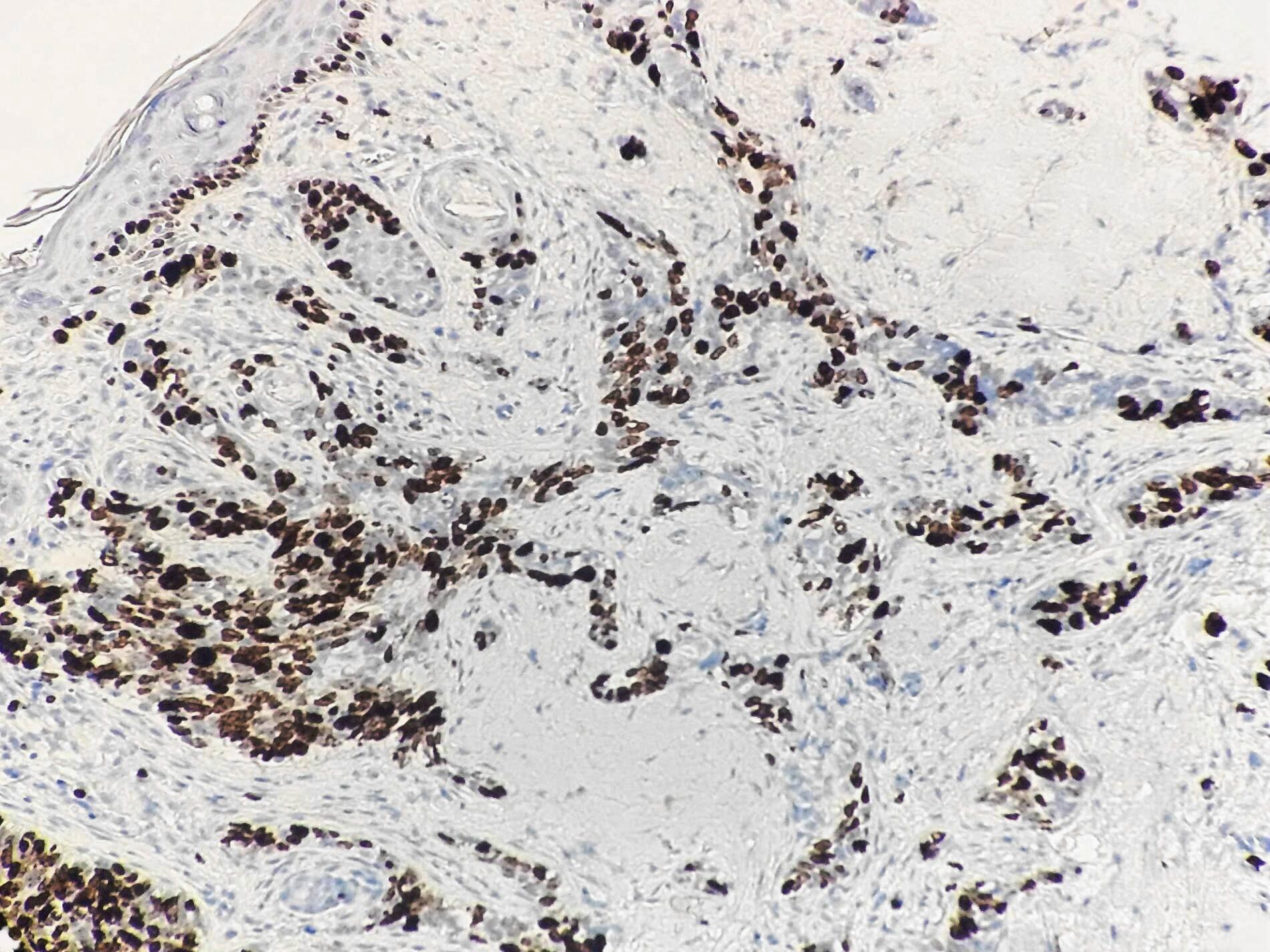 BCC of the skin is the most common malignancy in humans, being responsible for 70-80% of all skin malignant neoplasias [8-11]. It possess some unique features, such as locally invasive growth with almost total absence of metastases and very low mortality rates. Although it generally pursues a favourable clinical course, it may invade into the deep tissue structures, causing local destruction, if improperly managed or untreated [8-11]. Cutaneous BCCs are classified into either indolent-growth category (the superficial and nodular subtypes) or aggressive-growth category (the infiltrative, morpheaform, metatypical, and micronodular subtypes) [8, 9]. Various molecular markers have been studied in cutaneous BCCs; however, it is still not clearly understood, which of them are directly responsible for aggressive tumor behaviour, and conversely, which ones potentially prevent cancer cell metastasis [8].

IMP3, as already mentioned, is a cytoplasmic marker found in many malignancies [1, 2]. Since it shows a tendency towards higher expression in more aggressive neoplasms, it has been considered as a promising prognostic indicator [1-6]. However, while the number of studies suggesting the biological and clinical relevance of IMP3 is increasing, there is also a rising number of papers revealing apparent discrepancies with respect to the frequency of expression in some types of cancer [2]. Such discrepancies must have been related to using different antibody clones, staining protocols, and scoring criteria [2].

In cutaneous malignancies, IMP3 has been well-studied in melanoma. Many authors have demonstrated [12-15] that the expression of IMP3 is useful for diagnosis of melanoma (most melanomas are positive, while melanocytic nevi are usually negative), as well as is related to disease progression and predicts poor outcome.

This paper described the immunohistochemical expression status of IMP3 in a panel of 32 human BCCs of the skin. As pointed above, the expression of this marker was detected in 84.4% of cases. To the best of the author' s knowledge, only one study on the analysis of IMP3 in cutaneous BCC has been published until now [2]. In that paper [2], a total of 39 BCC cases were investigated: only 21% of them were IMP3-positive (weak positivity - 8%; moderate positivity - 8%; strong positivity - 5%). That finding contradicted with our research in which the percentage of IMP3-positive BCCs was much higher. Regarding the fact that normal epidermis was constantly negative for IMP3, there is no doubt, this oncoprotein is implicated in BCC development and carcinogenesis. However, our preliminary observations suggest that more pronounced IMP3 reactivity in neoplastic cells does not seem to directly contribute to the acqusition of more aggressive phenotype in this malignancy. Since we do not have an opportunity to compare our results with other papers, they require confirmation by other investigators. Further research might be useful to elucidate the mechanism and role of IMP3 in BCC biology and the current study may provide the basis for them.

The vast majority of cutaneous BCCs express IMP3, suggesting this oncoprotein is implicated in BCC carcinogenesis. However, more striking IMP3 expression does not appear to be associated with aggressive-growth phenotype of BCC or higher proliferative activity of neoplastic cells. Our findings indicate that immunohistochemical investigation of IMP3 may not be of diagnostic utility in predicting biological behavior of cutaneous BCC in daily biopsy practice.

The study was conducted according to the WHO Declaration of Helsinki – Ethical Principles for Medical Research Involving Human Subjects.

Informed consent was obtained from the patients.

Conflict of interest: The author declares that no conflicts exist.

Bartoš V, Adamicová K, Kullová M, Péč M. Basal cell carcinoma of the skin - biological behaviour of the tumor and a review of the most important molecular predictors of disease progression in pathological practice. Klin Onkol. 2011;24(1):8–17. Available from: https://pubmed.ncbi.nlm.nih.gov/21542271/