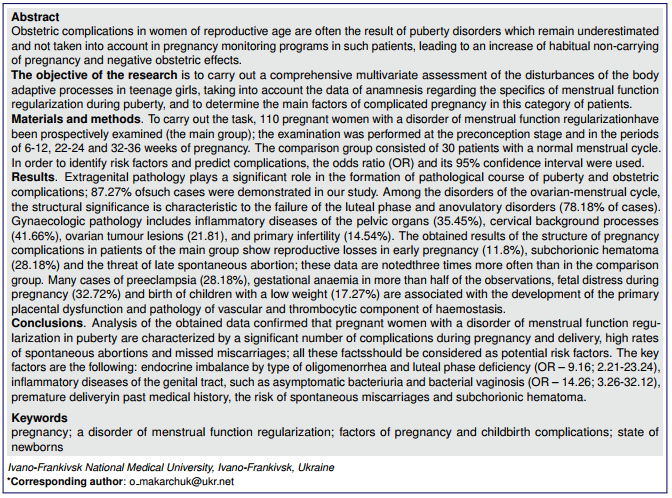 Obstetric complications in women of reproductive age are often the result of puberty disorders which remain underestimated and not taken into account in pregnancy monitoring programs in such patients, leading to an increase of habitual non-carrying of pregnancy and negative obstetric effects.

The objective of the research is to carry out a comprehensive multivariate assessment of the disturbances of the body adaptive processes in teenage girls, taking into account the data of anamnesis regarding the specifics of menstrual function regularization during puberty, and to determine the main factors of complicated pregnancy in this category of patients.

Materials and methods. To carry out the task, 110 pregnant women with a disorder of menstrual function regularizationhave been prospectively examined (the main group); the examination was performed at the preconception stage and in the periods of 6-12, 22-24 and 32-36 weeks of pregnancy. The comparison group consisted of 30 patients with a normal menstrual cycle. In order to identify risk factors and predict complications, the odds ratio (OR) and its 95% confidence interval were used.

Results. Extragenital pathology plays a significant role in the formation of pathological course of puberty and obstetric complications; 87.27% ofsuch cases were demonstrated in our study. Among the disorders of the ovarian-menstrual cycle, the structural significance is characteristic to the failure of the luteal phase and anovulatory disorders (78.18% of cases). Gynaecologic pathology includes inflammatory diseases of the pelvic organs (35.45%), cervical background processes (41.66%), ovarian tumour lesions (21.81), and primary infertility(14.54%). The obtained results of the structure of pregnancy complications in patients of the main group show reproductive losses in early pregnancy (11.8%), subchorionic hematoma (28.18%) and the threat of late spontaneous abortion; these data are notedthree times more often than in the comparison group. Many cases of preeclampsia (28.18%), gestational anaemia in more than half of the observations, fetal distress during pregnancy (32.72%) and birth of children with a low weight (17.27%) are associated with the development of the primary placental dysfunction and pathology of vascular and thrombocytic component of haemostasis.

Conclusions. Analysis of the obtained data confirmed that pregnant women with a disorder of menstrual function regularization in puberty are characterized by a significant number of complications during pregnancy and delivery, high rates of spontaneous abortions and missed miscarriages; all these factsshould be considered as potential risk factors. The key factors are the following: endocrine imbalance by type of oligomenorrhea and luteal phase deficiency (OR – 9.16; 2.21-23.24), inflammatory diseases of the genital tract, such as asymptomatic bacteriuria and bacterial vaginosis (OR – 14.26; 3.26-32.12), premature deliveryin past medical history, the risk of spontaneous miscarriages and subchorionic hematoma.

Kudinova YeG. Gestation course and childbirth in women with a disorder of menstrual function regularization in puberty.Yestestvoznaniye i gumanizm 2006; 3(3): 64–65.

Parashchuk YuS, Tuchkina IA. Non-hormonal treatment of adolescent girls with pathology of the pubertal period in the complex of stage rehabilitation. Eksperymentalna i klinichna medytsyna. 2005; 2: 144–147.