Peculiarities of Psychoemotional State in Pregnant Women with Oligohydramnios 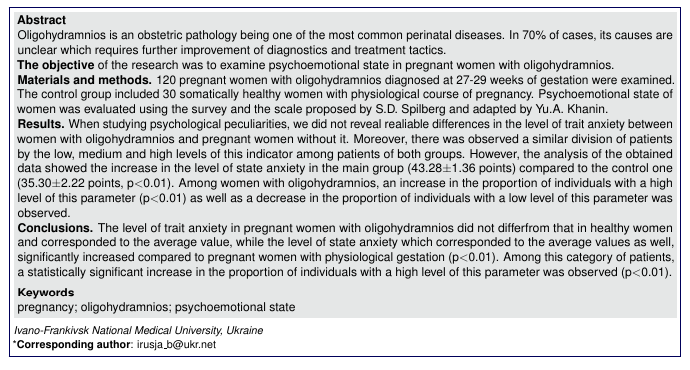 Oligohydramnios is an obstetric pathology being one of the most common perinatal diseases. In 70% of cases, its causes are unclear which requires further improvement of diagnostics and treatment tactics.

The objective of the research was to examine psychoemotional state in pregnant women with oligohydramnios.

Materials and methods. 120 pregnant women with oligohydramnios diagnosed at 27-29 weeks of gestation were examined. The control group included 30 somatically healthy women with physiological course of pregnancy. Psychoemotional state of women was evaluated using the survey and the scale proposed by S.D. Spilberg and adapted by Yu.A. Khanin.

Results. When studying psychological peculiarities, we did not reveal realiable differences in the level of trait anxiety between women with oligohydramnios and pregnant women without it. Moreover, there was observed a similar division of patients by the low, medium and high levels of this indicator among patients of both groups. However, the analysis of the obtained data showed the increase in the level of state anxiety in the main group (43.28±1.36 points) compared to the control one (35.30±2.22 points, p<0.01). Among women with oligohydramnios, an increase in the proportion of individuals with a high level of this parameter (p<0.01) as well as a decrease in the proportion of individuals with a low level of this parameter was observed.

Conclusions. The level of trait anxiety in pregnant women with oligohydramnios did not differfrom that in healthy women and corresponded to the average value, while the level of state anxiety which corresponded to the average values as well, significantly increased compared to pregnant women with physiological gestation (p<0.01). Among this category of patients, a statistically significant increase in the proportion of individuals with a high level of this parameter was observed (p<0.01).